We spend a considerable amount of time daydreaming (I know I do) about fantastic possibilities in our lifetime Owning a mansion by the sea. Becoming the chairman of our favorite organization. Winning that Olympic gold at a track event (even if we have never walked more than three hundred meters in our entire lifetime). Marrying a supermodel (Who is preferably even the daughter of a multi-billionaire). Flying to places in a private jet. Sporting the perfect body. And even slapping the boss for her incompetence.

We spend another significant portion of our life worrying about circumstances that don’t deserve our attention. Getting fired from our job even though we are still in the first year of college. Getting hit by a train outside our home, even though we live on a farm. What our future in-laws will think about us (find a nice boy first). Saying goodbye to our youth once we have kids. Not becoming a millionaire (worrying won’t help you get there). Ending up on a wheelchair (relax, you only tripped and broke your nose). Not managing to get enough followers on Instagram. Rahul Gandhi becoming the Indian prime minister. And even what we’re going to wear at our brother’s wedding, which is still fifteen months away. And if we have time in between these two activities, we get some work done and pay attention to our life as it stands in the present.

A lot of you may have seen (or at least heard of) the movie ‘The Devil Wears Prada’. For those of you that haven’t seen it, I suggest you stop working on that sales pitch, or college assignment, and even hand your infant to the neighbor for a couple of hours, and watch this movie instead. There are several reasons to watch this movie, but I’ll give you just one: Meryl Streep. Enough said!! 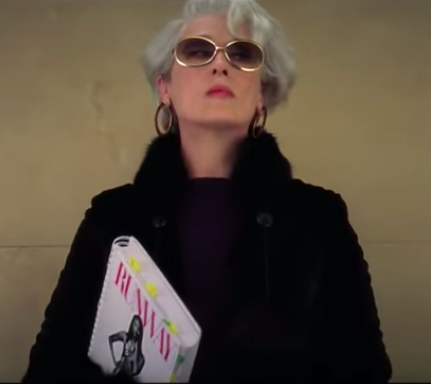 This movie released in 2006, while I was still in the USA. A few of us friends decided to catch a different movie (I can’t remember the name now) at the theaters, bought tickets and when we entered the screening hall, almost every seat seemed to have been taken, and the few available ones couldn’t be traced in the dark (We got there 5 minutes after show time). ‘The Devil Wears Prada’ was playing in the adjacent screening hall, and we decided to watch that instead (Since we had already paid for movie tickets and there was no way we were going to let that money go to waste). None of us expected much from the movie, but a few minutes into the movie I was completely dialed in. Not only did I find it thoroughly entertaining, but the simple message it gave me has stayed with me till date.

Anne Hathaway, a budding journalist decides to take up an internship at a fashion magazine, run by Meryl Streep, and soon realizes that this immaculately dressed lady is indeed the devil in disguise. She is hard to please, is a perfectionist and has the same expectation of others, seems to take pleasure in the discomfort of others, is almost never satisfied by the effort others put in, is unreasonable in practically every one of her demands, is a real taskmaster, and is dismissive of anyone’s feelings and opinions. Poor Anne struggles and pities herself (and complains and cries and shows open contempt), but then midway through the movie decides to raise her own bar and prove her mettle. She eventually quits her role at the fashion magazine, but not because she was bullied or beaten to the ground, but for reasons that aligned with her principles (And after completely impressing Ms. Devil with her hard work, dedication, sincerity, and fighting spirit).

The following year, I had a similar experience at my workplace with tough working conditions and a tougher boss. I went through the same ebbs initially (literally cowering at my desk), but then this movie (believe it or not) amongst supportive friends, my action figures, and sports, kept me going, and I managed to excel at work and silence my critics (including myself). I started out with ‘boo-hoo’ and ended up with ‘yoo-hoo’, more mature, robust, and with a sense of accomplishment.

Just like Anne, I had walked into this role daydreaming about the fancy stuff I would achieve and worrying about the problems I was likely to encounter, based on my preconceived notions. However, none of what and how I had anticipated actually happened. I did have significant highs and lows, but ones that were very different from what I had initially imagined. And I only managed to pull myself out of this rut, when I started living in the present and addressing the real world scenario as it occurred.

Mind you, both Ms. Streep and my boss worked hard and performed at a level that was of a very high standard and expected others to follow suit. They wanted their team to excel just as well and raise the organization to greater heights. Their work ethic is commendable, and with a little empathy, they could be great leaders. I’ve also encountered bosses that have wanted me to work hard, only so that they could rest on my laurels (And also take time out during work hours to go to the parlor). It is important to recognize people that put us through adversity for our own good and that of something bigger than us (like our team, organization, or community), from the ones that are looking to purely drive us to death while they reap the rewards.

I believe, our innate nature to daydream and worry is a combination of our genetics, upbringing, the exposure we have had to good and bad experiences and the impact it has had on our minds, the guidelines by which we have lived our life thus far, our belief system (which invariably gives rise to preconceived notions), and our hope and fears. The one thing we love doing as humans (besides playing the fool and shopping incessantly for unnecessary products) is imagining potential outcomes beforehand in any situation. The type of person we are (positive or negative, or just outright deranged) will decide whether that perceived outcome is a happy or frightful one.

Whether we’re daydreaming or worrying, the negative impacts of both are likely to be the same if that’s all we do, without addressing situations in the real world. We become like ‘deer in the headlights’ in our minds, before an event even occurs. In fact, studies show that 85 percent of what we worry about never happens. On the contrary, the stress generated leads to problems like a shrinking brain mass, lower IQ, heart diseases, aging, as well as problems in relationships. Similarly daydreaming and not acting is like being on a constant high (where we lounge around, smile and giggle at anything and everything), without testing the possibility of those dreams turning into reality.

It is important to dream because it gives birth to creativity and endless possibilities. It is also important to foresee pitfalls and be prepared mentally. However, it is more important to live in the present, deal with life’s real problems with dignity, grace, and determination, and truly understand our reasons for doing so. Just like we shouldn’t judge a book by its cover (unless it’s a Punisher comic because then it’s bound to be awesome), we should avoid judging people and the situations that follow based on preconceived notions and past experiences. They could be the devil in Armani or an angel in rags.

And eventually, let’s not forget the biggest mischief monger: our mind. Irrespective of our situation and the people around us that create it, our mind decides how we perceive it and act. Depending on how we train our mind, an angel may decide to be our companion or the devil may come out to play.